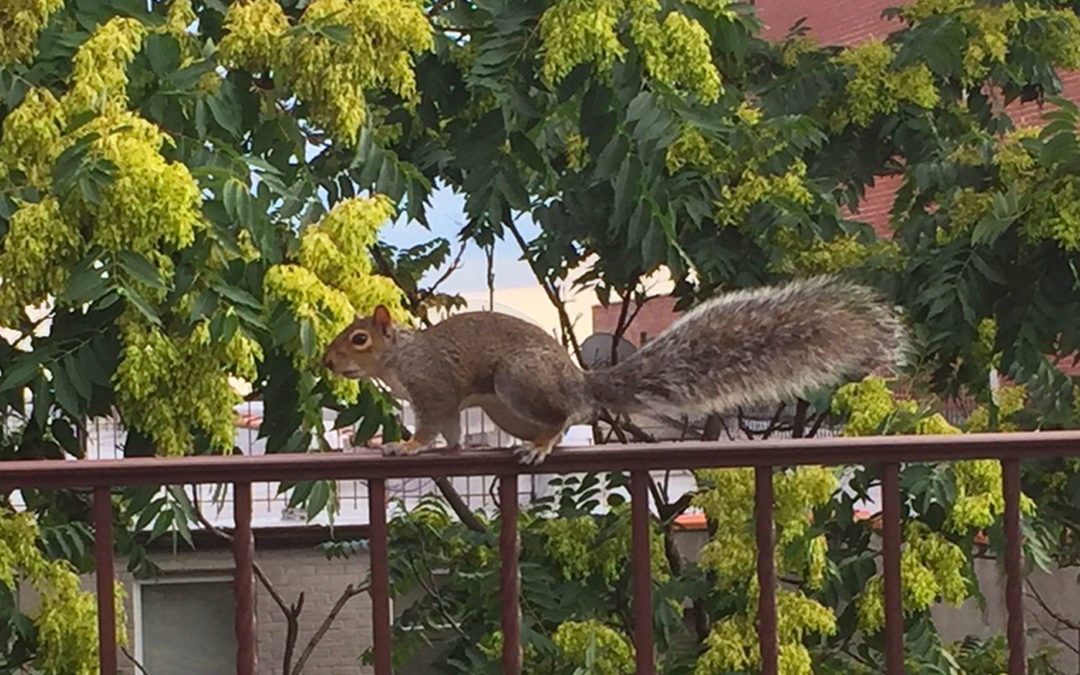 Did you miss me? No but seriously, I know I’ve been a very bad blogger – I took a little time off. It wasn’t really intentional, I thought about topics all the time. I guess I let my anxiety around picking the “right” topic get the best of me, and was consumed by the hustle and bustle of holiday activities and a healthy dose of family drama. But todays topic / approach has definitely popped up a few times, so I ‘m just gonna go with it. I hope you bear with me…

For most of you, when you see a squirrel, I imagine that they probably don’t elicit any type of significant emotion within you. May be you subconsciously think to yourself that they seem cute enough, especially when you catch them holding something like a peanut in those cute little paws. But, ya NO, not for me.

I swear those little paws seem to come from the devil himself. They come with long, sharp nails and the squirrels know how to use them relentlessly, with a persistence that under other circumstances might be considered admirable. And of course, they use these nails with no regard to anyone or anything. Squirrels don’t understand the concept of sleeping. In fact, in all likeliness they don’t even know the havoc they are causing less than 2 inches below their paws.

You may have guessed already that I’m having a bit of a squirrel problem. They are in my ceilings and walls, in my otherwise amazingly quiet Brooklyn brownstone home. To be honest, these squirrels invaded from the very first night we slept in our new home and I fought for over 6 months to get the issue solved. I almost went mad with hearing the scratching in the wee hours of the morning, in the late morning and afternoon as I typed away at the computer trying to find a job.Lord help a girl that can not quiet the scratching and scampering taking place above her head for a peaceful night of sleep. So, you can imagine the explosion that happened inside me when within the first few days of 2016, those wretched rodents threw an insane party in my ceiling. Somehow, the little varmints found their way back into my life. And I thought that all those holes were patched for good.

Patching up the Holes

It may sound crazy, but this whole phenomenon made me think about a parallel situation in my own life.

For weeks (months actually) leading up to the holidays, there were some thoughts and people in my life that were hacking away in my head. These thoughts were preventing me from getting a good nights sleep. They were making my blood boil at the very moment I had time to think in between  activities. I would be exhausted and ready for bed, only to find out these people and thoughts were somehow getting back in my head.

I like to think I turned a corner coming into the New Year. I made some decisions. I decided to deal with some situations with MY SANITY and MY HAPPINESS as the first priority. And for me, that’s a tough one because I have a tendency to put others’ desires first, over my own needs. I also started really trying to plug up holes keeping the people out of my life that were being destructive, or that didn’t really value our relationship. It was difficult to accept that some people aren’t meant to be in your life forever, even family. I literally reached out to some of my family members in an attempt to keep relationships going, which resulted in radio silence. So, what else could I do but patch up the hole. And if someday they want to scratch and claw their way back in, I guess I will just deal with it then. But for now, I decided to let it be and not let the despair of the situation enter my heart.

Lastly, and perhaps most importantly I am making a big effort to plug up the hole on negativity. I am calling into my life positive thoughts ONLY. I know, I know.  Are you imagining all of those positive quotes streaming on your Instagram account? Are recalling all those magnets you see at the store like “Be the change you want to see in the world”? If so, I get it, it’s advice we often get, but don’t often follow. But in 2016 I’m just forgoing the long resolution list – after the past year’s been all about change and self-reflection. I’m just gonna take this one thing to focus on. This one thing that I think really will make all the difference. No more self-doubt, wallowing in the questions dealing with the unknown. No more focusing on bad days (including the crazy squirrel parties taking place above my head). No more caring about rejections, or unanswered emails. No more staring at Facebook for hours. I’m refusing to let “groundhog day” happen in my daily pattern or in my thought process. I’m going to take the energy of all the positive things in my world, have faith in the Universe (not to be confused with the Mrs. Universe pageant) and embrace all that is and all that will be. Maybe a “squirrel” will get in once in a while. A negative thought. A hard day. But I’ve got some tools in my toolbox to quickly get them back out, I just need to use them and not freak out.

Maybe I shouldn’t be so surprised that today we actually have our first trapped squirrel. Before long those squirrels will be out of my head, the holes will be patched up and the magic of the Universe will continue to present itself.